Email ThisBlogThis!Share to TwitterShare to FacebookShare to Pinterest
Labels: Lectures

Session IX: Thursday, 21st October 2021, 12:00-13:30 Central Time Zone (United States and Canada) (= 11:00-12:30 Mountain Time Zone = 17:00-18:30 GMT). (Time Zones in North America take account of Daylight Saving Time.)
Speaker: John Pittard (Yale University)
Title: “How Should We Respond to Evidence of Boltzmann Brain Superabundance?”
Abstract: A “Boltzmann Brain” is a “brain” that forms by chance in an otherwise disordered region of space. Some leading cosmological models predict that in the future history of the universe, there are sure to be numerous Boltzmann Brains that pass through a sequence of physical states that mirror states of your own brain over the last several seconds. Plausibly, these Boltzmann Brains would have an episode of conscious experience that is phenomenally equivalent to your recent experience. In this paper, I assess the skeptical challenge posed by scientific support for Boltzmann Brain superabundance. I begin by critiquing a recent treatment of Boltzmann Brain skepticism by Dogramaci, explaining why his response has absurd implications and is not germane to the most formidable skeptical worry posed by predictions of Boltzmann Brains. I then consider other responses, including an argument articulated by Kotzen and Chalmers that says that the coherence of one’s present experience provides strong evidence against theories predicting Boltzmann Brains. While this argument has promise, it depends on controversial principles of “observation selection theory” that can be used to support dubious positions such as an anthropocentric theory of consciousness.
To join the meeting: https://us02web.zoom.us/j/88352861727
Information about past and upcoming sessions can be found here: https://skepticismnetwork.weebly.com/skepticism-lecture-series.html
Posted by DEM at 10:50 PM No comments:

Those working on Academic skepticism might be interested in the following recent book:
Charles Snyder, Beyond Hellenistic Epistemology: Arcesilaus and the Destruction of Stoic Metaphysics. Bloomsbury Academic, 2021.
More information can be found here.
Posted by DEM at 2:10 AM No comments:

Email ThisBlogThis!Share to TwitterShare to FacebookShare to Pinterest
Labels: Books

The third issue of volume 11 (2021) of the International Journal for the Study of Skepticism has been published and can be found here. It includes articles by François-Xavier de Peretti and Marin Geier, discussions by Ryan McCoy and Howard Sankey, and book reviews by Stéphane Marchand and Roger Clarke.
Posted by DEM at 4:05 PM No comments:

Email ThisBlogThis!Share to TwitterShare to FacebookShare to Pinterest
Labels: Journals

The fourth volume of the book series Brill Studies in Skepticism is now out: 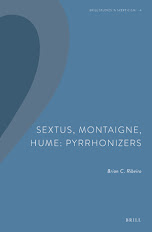 Session VIII: Thursday, 5th August 2021, 12:00-13:30 Central Time Zone (United States and Canada) (= 11:00-12:30 Mountain Time Zone = 17:00-18:30 GMT). (Time Zones in North America take account of Daylight Saving Time.)
Speaker: Michelle Woodland (Texas Tech University).
Title: “Vogel on Inference to the Best Explanation as a Response to Underdetermination Skepticism.”
Abstract: In this paper, I will defend what Jonathan Vogel refers to as ‘domestic skepticism’ against his claim of refutation. The type of skepticism at issue concerns itself with the explanation for sensory experience. The skeptic claims that sensory experience is underdetermined between the virtual and material worlds. However, Vogel argues that the material world is the best explanation for our sensory experience. He presupposes three assumptions for what he considers the best explanation, and argues that the material world satisfies these criteria better than any skeptical hypothesis. So, according to Vogel, the material world and the virtual world are not underdetermined and we have a reason to favor the material world hypothesis. I will attempt to argue that Vogel’s refutation against underdetermination skepticism does not succeed by specifically arguing against his simplicity criterion to show that underdetermination skepticism, at least in regards to the material and virtual world hypotheses, does not yet seem to be refuted.
To join the meeting: https://us02web.zoom.us/j/85822420317.
Posted by DEM at 12:58 AM No comments:

In a couple of weeks, the FeedBurner email subscription will stop working. Thus far, I haven't found a good replacement, so I will try to email new posts "manually" to registered readers. 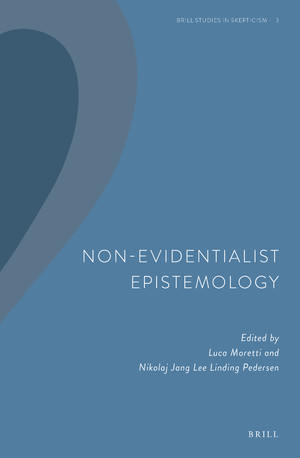 The third summer school of the Maimonides Centre for Advanced Studies, to be held on Zoom on July 18–23, will be devoted to “Facets of Early Modern Scepticism.” Participation is free and complete information can be found here.
Posted by DEM at 4:22 PM No comments:

Session VII: Thursday, 15th July 2021, 12:00-13:30 Central Time (United States and Canada) (= 11:00-12:30 Mountain Time Zone = 17:00-18:30 GMT).
Speaker: Kim Davis (Durham University)
Title: “Transcendental Arguments and Conceptual Development.”
Abstract: Transcendental arguments (TAs) against scepticism are out of fashion. Stroud’s persistent criticisms seem to show that the most we can hope for are modest TAs which articulate what we must believe to be the case, even if the truth of that belief cannot be proven. In this talk I will argue that the traditional starting point of TAs in subjective experience needs to be replaced by a double-headed approach if TAs are to reach conclusions concerning the truth of interesting metaphysical claims. The first strand of the approach is to clarify the critical concept of thought’, as potentially diverging from reality, as key to the sceptic’s position. The second analyses the necessary conditions of the possibility of the key concept. I will argue that the critical concept of thought is possible only through reflection on disruption in a previously unarticulated harmony between how things are thought to be and how they really are, and that this in turn requires the actual existence of – not just the belief in – an epistemically objective realm of ontologically independent items. This a-priori argument is given support from recent empirical work in conceptual development on the process of creating new conceptual resources not entirely grounded in antecedent ones.
To join the Zoom meeting, go here: https://us02web.zoom.us/j/82476774473.
Information about past and future sessions can be found here:
https://skepticismnetwork.weebly.com/skepticism-lecture-series.html
Posted by DEM at 12:27 PM No comments:

Email ThisBlogThis!Share to TwitterShare to FacebookShare to Pinterest
Labels: Lectures

Session VI: Thursday, 24th June 2021, 12:00-13:30 US Central Time (= 17:00-18:30 GMT).
Speaker: Michael Vollmer (Universität Innsbruck).
Title: “From Logical Nihilism to Logical Skepticism.”
Abstract: Logical nihilism is one of the newest installments in the debate about the philosophy of logic. According to this position, there are no laws of logic and the only legitimate consequence relation is an empty one. In my talk, I will argue that the points in favor of logical nihilism should rather be seen as an argument towards logical skepticism in posing a significant challenge to any positive account of logic. Thus, my aim is threefold: First, I am going to show where the justification provided for logical nihilism is lacking. Second, by drawing on Sinnott-Armstrong's ideas on the connection between moral nihilism and moral skepticism, I will provide an analogous line of thought for the case of logic. Last, I will challenge a direct, abductivist response to the possibility of nihilism and draw some general conclusions for the epistemology of theories of logic.
To join the Zoom meeting, go here: https://us02web.zoom.us/j/81886509602.
Posted by DEM at 1:44 PM No comments:

On June 18-19, there will be an online workshop on “Ethics of Conversation and Disagreement.” Complete information, including the program, can be found here. To register, you need to contact the organizers. But if you don't get a reply soon enough, send me an email and I'll provide you with the info to join the two Zoom meetings.

The second issue of volume 11 (2021) of the International Journal for the Study of Skepticism has been published and can be found here. It is devoted to a symposium on Genia Schönbaumsfeld’s The Illusion of Doubt (OUP, 2016), with contributions by Danièle Moyal-Sharrock, Chris Ranalli, and Michael Williams.
Posted by DEM at 3:16 PM No comments: